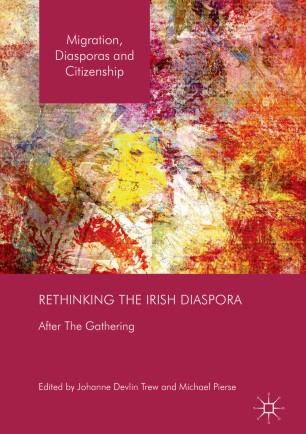 Part of the Migration, Diasporas and Citizenship book series (MDC)

This book provides scholarly perspectives on a range of timely concerns in Irish diaspora studies. It offers a focal point for fresh interchanges and theoretical insights on questions of identity, Irishness, historiography and the academy’s role in all of these. In doing so, it chimes with the significant public debates on Irish and Irish emigrant identities that have emerged from Ireland’s The Gathering initiative (2013) and that continue to reverberate throughout the Decade of Centenaries (2012-2023) in Ireland, North and South. In ten chapters of new research on key areas of concern in this field, the book sustains a conversation centred on three core questions: what is diaspora in the Irish context and who does it include/exclude? What is the view of Ireland and Northern Ireland from the diaspora? How can new perspectives in the academy engage with a more rigorous and probing theorisation of these concerns? This thought-provoking work will appeal to students and scholars of history, geography, literature, sociology, tourism studies and Irish studies.