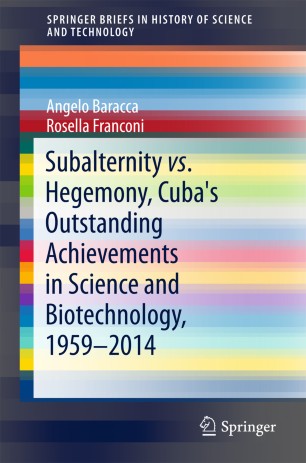 Subalternity vs. Hegemony, Cuba's Outstanding Achievements in Science and Biotechnology, 1959-2014

The present book introduces an original (new) perspective on Cuba. This book revisits Cuba's choice, after the 1959 revolution, to develop an advanced healthcare and scientific system. It also introduces new aspects of the problem development/underdevelopment. From the start, every effort of the Cuban leadership and scientific community was driven by the primary purpose of meeting the country’s basic economic and social needs. Immediate key measures taken after the revolution included free education up to  higher levels and free health services. In only a couple of decades Third World diseases were defeated and a First World health profile was achieved. In the sciences, support and collaboration was sought and welcomed from both Soviet and western countries. Moreover, due to the backward position of the Soviet Union in genetics and molecular biology, in the early 1970s Cuban scientists were trained in these fields mainly by Italian biologists. In the following decade, initially relying on contacts with American and Finnish specialists, Cuban biologists and physicians built a large industrial biotechnology complex to produce and commercialize Cuban-made, and often invented, medicines and vaccines.

In the early 1990s the sudden collapse of the Soviet Union and the socialist market created an unprecedented challenge. Yet Cuba’s scientific system substantially resiled, despite unavoidable setbacks. This crisis was faced by confirming and reinforcing government support for biotechnology, with the result that today Cuba excels at a global level in the typical capital-intensive field of biotechnology.

While this book is especially devoted to historians of science and technology and to biotechnologists, it is of interest to the general public.