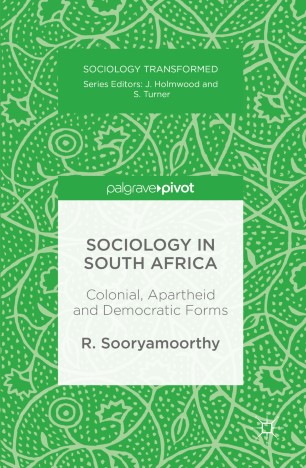 'South Africa is a unique country redolent of a multitude of social challenges and tremulous with future possibilities in which local sociology is inevitably intertwined with its societal trajectory. R. Sooryamoorthy has assembled the story of South African sociology drawing extensively on the already published literature together with interesting and original scientometric data.'
-Charles Crothers, Auckland University of Technology, New Zealand
This book is the first comprehensive account of the history and current state of South African sociology. Providing a holistic picture of the subject both as it is taught in universities and as a field of research, it reveals the trajectories of a discipline in a challenging socio-political context. With the support of historical and scientometric data, it demonstrates how the changing political situation, from colonialism to apartheid to democracy, has influenced the nature, direction and foci of sociological research in the country. The author shows how, during the apartheid era, sociology was professionally fragmented and divided along language and race lines. It was, however, able to flourish with the advent of democracy in 1994 and has become a unique academic movement. This insightful work will appeal to students and scholars of the social sciences, and all those interested in the history and society of South Africa.
R. Sooryamoorthy is Professor of Sociology at the University of KwaZulu- Natal, South Africa. He has taught at the Acharya Nagarjuna University and Loyola College of Social Sciences (both in India), the University of Calgary (Canada), and the Lulea University of Technology (Sweden). His publications include Science in Participatory Development (co-author), NGOs in India: A Cross-sectional Study (co-author) and Transforming Science in South Africa.