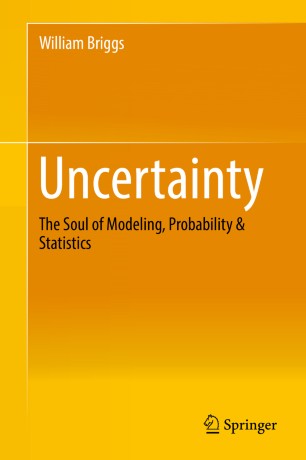 The Soul of Modeling, Probability & Statistics

This book presents a philosophical approach to probability and probabilistic thinking, considering the underpinnings of probabilistic reasoning and modeling, which effectively underlie everything in data science. The ultimate goal is to call into question many standard tenets and lay the philosophical and probabilistic groundwork and infrastructure for statistical modeling. It is the first book devoted to the philosophy of data aimed at working scientists and calls for a new consideration in the practice of probability and statistics to eliminate what has been referred to as the "Cult of Statistical Significance".

The book explains the philosophy of these ideas and not the mathematics, though there are a handful of mathematical examples. The topics are logically laid out, starting with basic philosophy as related to probability, statistics, and science, and stepping through the key probabilistic ideas and concepts, and ending with statistical models.

Its jargon-free approach asserts that standard methods, such as out-of-the-box regression, cannot help in discovering cause. This new way of looking at uncertainty ties together disparate fields — probability, physics, biology, the “soft” sciences, computer science — because each aims at discovering cause (of effects). It broadens the understanding beyond frequentist and Bayesian methods to propose a Third Way of modeling.

William M. Briggs, PhD, is Adjunct Professor of Statistics at Cornell University. Having earned both his PhD in Statistics and MSc in Atmospheric Physics from Cornell University, he served as the editor of the American Meteorological Society journal and has published over 60 papers. He studies the philosophy of science, the use and misuses of uncertainty - from truth to modeling. Early in life, he began his career as a cryptologist for the Air Force, then slipped into weather and climate forecasting, and later matured into an epistemologist. Currently, he has a popular, long-running blog on the subjects written about here, with about 70,000 - 90,000 monthly readers.