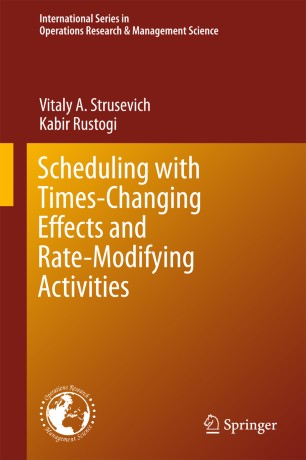 In scheduling theory, the models that have attracted considerable attention during the last two decades allow the processing times to be variable, i.e., to be subjected to various effects that make the actual processing time of a job dependent on its location in a schedule. The impact of these effects includes, but is not limited to, deterioration and learning. Under the first type of effect, the later a job is scheduled, the longer its actual processing time becomes. In the case of learning, delaying a job will result in shorter processing times. Scheduling with Time-Changing Effects and Rate-Modifying Activities covers and advances the state-of-the-art research in this area.

The book focuses on single machine and parallel machine scheduling problems to minimize either the maximum completion time or the sum of completion times of all jobs, provided that the processing times are subject to various effects. Models that describe deterioration, learning and general non-monotone effects to be considered include positional, start-time dependent, cumulative and their combinations, which cover most of the traditionally used models. The authors also consider more enhanced models in which the decision-maker may insert certain Rate-Modifying Activities (RMA) on processing machines, such as for example, maintenance or rest periods. In any case, the processing times of jobs are not only dependent on effects mentioned above but also on the place of a job in a schedule relative to an RMA. For most of the enhanced models described in the book, polynomial-time algorithms are presented which are based on similar algorithmic ideas such as reduction to linear assignment problems (in a full form or in a reduced form), discrete convexity, and controlled generation of options.

Dr Vitaly Strusevich is a Professor of Operational Research in the Department of Mathematical Sciences of the University of Greenwich, London, UK. He holds two PhD degrees, one from the Belarusian Academy of Sciences (1982) and the other from Erasmus University, The Netherlands (1991). He was a member of the team of six researchers awarded The State Prize of the Republic of Belarus in Science and Technology (1998), the highest award of the country of his origin. Professor Strusevich has published more than 120 papers in referred journals and several books, including Scheduling Theory, and in Multi-Stage Systems, which appeared in English in 1994. He acted as a guest editor for six special issues, the two most recent ones in Journal of Scheduling and Annals of Operations Research. Currently, he is an Associate Editor of Omega. He participated in organising several conferences on scheduling, planning and combinatorial optimisation, and as the main organiser or the programme committee member. His main research interests are in combinatorial optimization, including scheduling theory, non-linear Boolean programming and optimization under submodular constraints.
Dr Kabir Rustogi is currently working in the Logistics industry in New Delhi, India, as an Operational Research scientist. Formerly, he was a Senior Lecturer of Operational Research in the Department of Mathematical Sciences of the University of Greenwich, London, UK. He received his PhD from Greenwich in 2013 for his work on machine scheduling with changing processing times, which also won him the prestigious O.R. Society Best PhD Award in the United Kingdom. He has published his work in several high impact journals and is widely cited, even at an early stage of his career. His previous degrees include an MSc in Operational Research from the University of Edinburgh and a BTech in Engineering Physics from the Indian Institute of Technology Delhi.