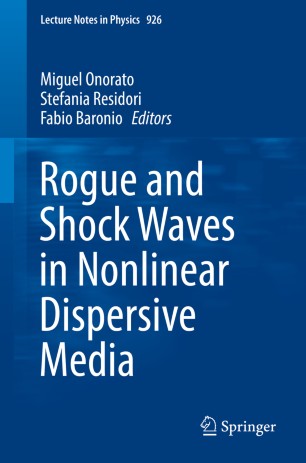 This self-contained set of lectures addresses a gap in the literature by providing a systematic link between the theoretical foundations of the subject matter and cutting-edge applications in both geophysical fluid dynamics and nonlinear optics.

Rogue and shock waves are phenomena that may occur in the propagation of waves in any nonlinear dispersive medium. Accordingly, they have been observed in disparate settings – as ocean waves, in nonlinear optics, in Bose-Einstein condensates, and in plasmas. Rogue and dispersive shock waves are both characterized by the development of extremes: for the former, the wave amplitude becomes unusually large, while for the latter, gradients reach extreme values. Both aspects strongly influence the statistical properties of the wave propagation and are thus considered together here in terms of their underlying theoretical treatment.

This book offers a self-contained graduate-level text intended as both an introduction and reference guide for a new generation of scientists working on rogue and shock wave phenomena across a broad range of fields in applied physics and geophysics.