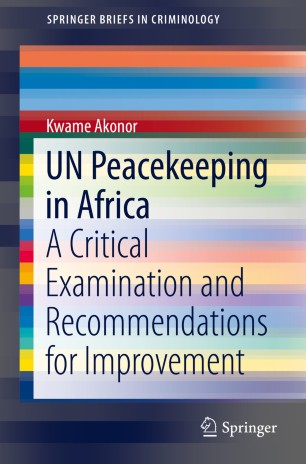 A Critical Examination and Recommendations for Improvement

This timely volume explores the “dark side” of United Nations (UN) Peacekeeping in Africa: when rather than help establish a rule of law in the host country, they become perpetrators of crime. The work of the UN peacekeepers is generally comprised of police and military personnel, from countries who contribute voluntarily to assist war-torn countries create conditions for lasting peace. Overall, these peacekeeping efforts are perceived positively, with volunteers giving their time and risking their lives to bring normalcy and peace to civilians in countries with conflict. In fact, there are cases where UN Peacekeepers are sometimes the victims of violent crimes, and need security and protection themselves.

Although instances of abuse are not widespread and are certainly not isolated to Africa, this work focuses on Africa because there is a high concentration of UN Peacekeepers there, and lessons learned can be applied to other regions. The instances of abuse cover serious crimes including sexual abuse and exploitation, child and arms trafficking, and corruption, all of some of the most vulnerable populations in the world at the time. Although these instances are not extensive, they remain a fundamental problem because there is no existing mechanism for prosecution in the international area: it is only the troops’ home country, not the UN, who has the right to exercise criminal jurisdiction. The also undermine the good work that UN Peacekeepers are doing all over the world.

This work is concerned with highlighting why these instances occur, and why specific forms of abuse are more prevalent than others. It also discusses how to prevent abuse and violations from happening in the first place, and creating a culture of change and accountability. Finally, taking into account cultural and legal systems from troops’ home countries, the author considers the ways that local rules can be aligned with international standards. In will be of interest to researchers in Criminology and Criminal Justice, International Relations, Sociology and Demography, Public Health, Comparative Law, and other related disciplines.