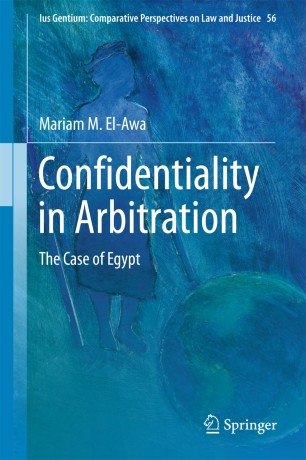 The Case of Egypt

The book takes into account the relevant provisions in the arbitration laws of Syria, Saudia Arabia and Yemen. It moves on to explore the relation between arbitration and the judicial system, and the extent to which the former should borrow its rules from the latter with regard to publicity and the rule of public trial. Finally, this book looks at the right to privacy as (a) a constitutional right, as a potential basis for a legal duty of confidentiality in arbitration, and the duties stemming from this constitutional right in the various laws of Egypt, as well as (b) the constraints imposed on the right to privacy, in particular those stemming from the constitutional principles of freedom of speech and freedom of the press.

The main conclusion is that confidentiality does indeed exist in arbitration. However, its legal basis is not the law on arbitration or the arbitration agreement. It is in fact a corollary of the fundamental right to privacy granted in the Egyptian legal system to both natural and legal persons.