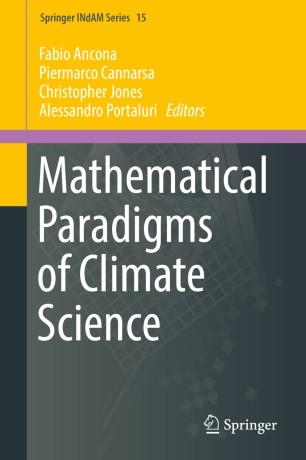 This book, featuring a truly interdisciplinary approach, provides an overview of cutting-edge mathematical theories and techniques that promise to play a central role in climate science. It brings together some of the most interesting overview lectures given by the invited speakers at an important workshop held in Rome in 2013 as a part of MPE2013 (“Mathematics of Planet Earth 2013”). The aim of the workshop was to foster the interaction between climate scientists and mathematicians active in various fields linked to climate sciences, such as dynamical systems, partial differential equations, control theory, stochastic systems, and numerical analysis. Mathematics and statistics already play a central role in this area. Likewise, computer science must have a say in the efforts to simulate the Earth’s environment on the unprecedented scale of petabytes. In the context of such complexity, new mathematical tools are needed to organize and simplify the approach. The growing importance of data assimilation techniques for climate modeling is amply illustrated in this volume, which also identifies important future challenges.
This timely work is mainly addressed to any researcher active in climate science to learn more on qualitative and quantitative methods recently developed for their discipline as well as mathematicians with a strong interest in environmental science. It may also be useful to PhD students in applied mathematics to find excellent research subjects for their thesis.