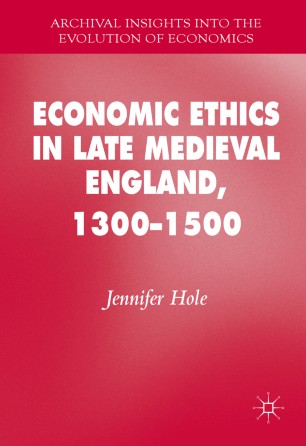 Drawing on an array of archival evidence from court records to the poems of Chaucer, this work explores how medieval thinkers understood economic activity, how their ideas were transmitted and the extent to which they were accepted. Moving beyond the impersonal operations of an economy to its ethical dimension, Hole’s socio-cultural study considers not only the ideas and beliefs of theologians and philosophers, but how these influenced assumptions and preoccupations about material concerns in late medieval English society. Beginning with late medieval English writings on economic ethics and its origins, the author illuminates a society which, although strictly hierarchical and unequal, nevertheless fostered expectations that all its members should avoid greed and excess consumption. Throughout, Hole aims to show that economic ethics had a broader application than trade and usury in late medieval England.