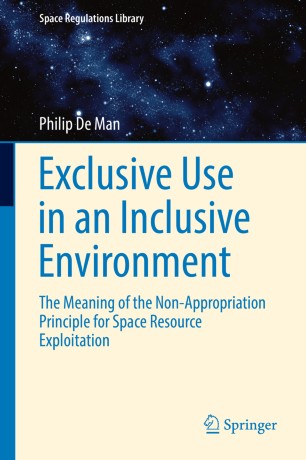 Exclusive Use in an Inclusive Environment

The Meaning of the Non-Appropriation Principle for Space Resource Exploitation

This book aims to find a workable interpretation of the non-appropriation principle that is compatible with both the existing international space law framework and the move of the private space industry towards the mining of asteroids and other celestial bodies. It does so by analysing the rules on the use of orbits as limited natural resources as a concrete indication of how space resources can be exploited by one user while respecting the non-appropriation principle and the interests of other users in space. This analysis is complemented by a thorough review of the meaning of property rights in the context of the existing international space law regime. This allows the author to distinguish between the lawful exploitation and unlawful appropriation of resources in a manner that could pave the way for a workable asteroid mining regime that takes into account the needs of individual companies and the international community.

Exclusive use in an inclusive environment frames the legal regime of the exploitation of natural resources in outer space as the most pressing example to date of the tension that arises between the rights of a single spacefaring actor and the interests of the broader international community. Though academic in its approach in dealing with one of the most fundamental issues of space law to date, the book has very practical ambitions. By offering a pragmatic interpretation of the space law principles that are likely to remain the legal foundations of asteroid mining for the foreseeable future, Exclusive use in an inclusive environment hopes to inform academics, practitioners and policymakers alike in their future attempts at working out a fair, equitable and effective management regime for the exploitation of natural resources in outer space.