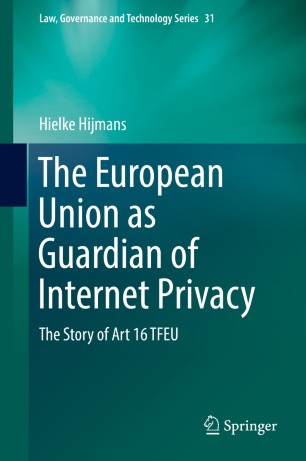 The Story of Art 16 TFEU

The book takes the perspective of the EU mandate under Article 16 TFEU. It analyses the contributions of the specific actors and roles within the EU framework: the judiciary, the EU legislator, the independent supervisory authorities, the cooperation mechanisms of these authorities, as well as the EU as actor in the external domain.

Article 16 TFEU enables the Court of the Justice of the EU to play its role as constitutional court and to set high standards for fundamental rights protection. It obliges the European Parliament and the Council to lay down legislation that encompasses all processing of personal data. It confirms control by independent supervisory authorities as an essential element of data protection and it gives the EU a strong mandate to act in the global arena.

The analysis shows that EU powers can be successfully used in a legitimate and effective manner and that this subject could be a success story for the EU, in times of widespread euroskepsis. It demonstrates that the Member States remain important players in ensuring privacy and data protection. In order to be a success story, the key stakeholders should be prepared to go the extra mile, so it is argued in the book.

The book is based on academic research for which the author received a double doctorate at the University of Amsterdam and the Vrije Universiteit Brussels. It builds on a long inside experience within the European institutions, as well as within the community of data protection and data protection authorities.

It is a must read in a time where the setting of EU privacy and data protection is changing dramatically, not only as a result of the rapidly evolving information society, but also because of important legal developments such as the entry into force of the General Data Protection Regulation.

This book will appeal to all those who are in some way involved in making this regulation work. It will also appeal to people interested in the institutional framework of the European Union and in the role of the Union of promoting fundamental rights, also in the wider world.