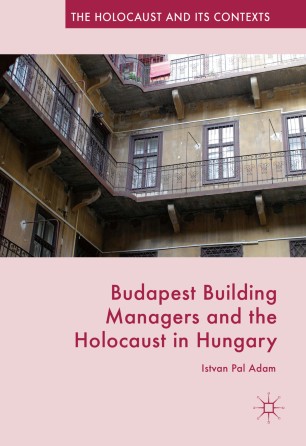 Budapest Building Managers and the Holocaust in Hungary

This book traces the role of Budapest building managers or concierges – in Hungarian: házmester – during the Holocaust. It analyzes the actions of a group of ordinary citizens in a much longer timeframe than Holocaust scholars usually do. Thus, it situates the building managers’ activity during the war against the background of the origins and development of the profession as a by-product of the development of residential buildings since the forming of Budapest. Instead of presenting a snapshot from 1944, it shows that the building managers’ wartime acts were influenced and shaped by their long-term social aspiration for greater recognition and their economic expectations. Rather than focusing solely on pre-war antisemitism, this book takes into consideration other factors from the interwar period, such as the culture of tipping. In Budapest, during June 1944, the Jewish residents were separated not into a single closed ghetto area, but by the authorities designating dispersed apartment buildings as “ghetto houses”. The almost 2,000 buildings were spread through the entire city and the non-Jewish concierges serving in these houses represented the link between the outside and the inside world. The empowerment of these building managers happened as a side-effect of the anti-Jewish legislation and these concierges found themselves in an intermediary position between the authorities and the citizens.