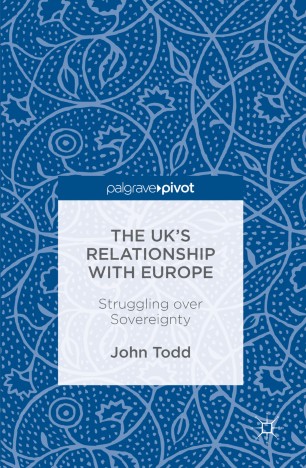 The UK’s Relationship with Europe

This book provides an accessible and timely analysis of how the British discourse on Europe has evolved over the past forty years. It focuses on three key episodes: the 1975 referendum on the UK’s continued membership of the European Economic Community; the 1992-3 debates on ratification of the Maastricht Treaty; and the more recent proto-referendum debates sparked by David Cameron’s Bloomberg speech in January 2013.  Using a discourse-analytical approach, the book analyses how political and media voices seek to delineate a British sense of self from a Continental other. Importantly, the book also pays close attention to the rising prominence of immigration issues within the British discourse on Europe.
John Todd is a PhD candidate at the University of Oslo’s Department of Criminology and Sociology of Law, Norway. He holds a Master’s degree in International Relations from the Norwegian University of Life Sciences and has worked in a range of policy roles within the civil service in Belfast and London.