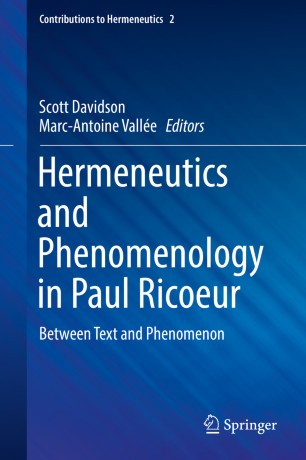 Hermeneutics and Phenomenology in Paul Ricoeur

Between Text and Phenomenon

Hermeneutics and Phenomenology in Paul Ricoeur: Between Text and Phenomenon calls attention to the dynamic interaction that takes place between hermeneutics and phenomenology in Ricoeur’s thought. It could be said that Ricoeur’s thought is placed under a twofold demand: between the rigor of the text and the requirements of the phenomenon. The rigor of the text calls for fidelity to what the text actually says, while the requirement of the phenomenon is established by the Husserlian call to return “to the things themselves.” These two demands are interwoven insofar as there is a hermeneutic component of the phenomenological attempt to go beyond the surface of things to their deeper meaning, just as there is a phenomenological component of the hermeneutic attempt to establish a critical distance toward the world to which we belong. For this reason, Ricoeur’s thought involves a back and forth movement between the text and the phenomenon. Although this double movement was a theme of many of Ricoeur’s essays in the middle of his career, the essays in this book suggest that hermeneutic phenomenology remains implicit throughout his work. The chapters aim to highlight, in much greater detail, how this back and forth movement between phenomenology and hermeneutics takes place with respect to many important philosophical themes, including the experience of the body, history, language, memory, personal identity, and intersubjectivity.