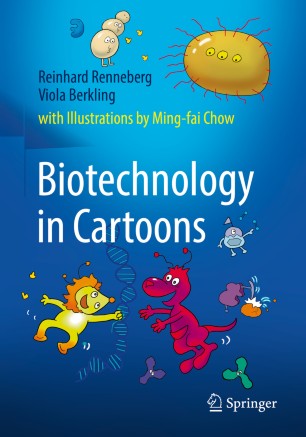 The book introduces to the basics of biotechnology and lets young and old cartoon fans enjoy science in a relaxed and comprehensive way. Together with Professor Nanoroo, the story's likeable protagonist, the reader discovers on how biotechnology influences our daily life. The real science behind the funny cartoons is explained briefly in separate boxes.
The Story:
A shooting star falls to Earth in the Kingdom Macronesia.
When King Richard VIII. examines the stardust  under a super microscope, he discovers a small nanoscopic intelligent being in a micro-spacecraft ... Professor Nanoroo came down from planet Nano to Earth to understand human biotechnology. Curious, he communicates with „Earthlings“, all asking hundreds of questions relating their life.
Nanoroo encounters bread baking and beer brewing yeasts; disease makers and health- stabilizing bacteria; fungi producing drugs against bacteria. He experiences many adventures, rescues the king's brother from a heart attack, measures King Richard’s glucose level and the fitness of his racehorses, watches plants with their insect repellents and eats the famous and vitamin-rich „Golden Rice“.
The real science behind the funny cartoons is explained briefly in boxes.
While Nanoroo at his happy end departs from the Earth with the promise to come back, young and old cartoon fans have already enjoyed the basics of biotechnology in a relaxed and comprehensive way.
The Authors:
Reinhard Renneberg has been working as Professor of Analytical Biotechnology at the Hong Kong University of Science and Technology (www.ust.hk), the top university of Asia, since 1995. He is the author of several textbooks, including A spoonful of Biotech and Katzenklon, Katzenklon. Along with Viola Berkling, Master of Oriental Languages, he has published already in its fourth edition the extremely successful internationally recognized textbook Biotechnology for Beginners. It is translated into English, Spanish, Chinese, Japanese and Korean. The duo stands for inspiring creative as well as innovative knowledge transfer of accurate, awesome illustrated and non-boring texts from the world of biotechnology.
The Cartoonist:
Ming-fai Chow, the Hong Kong cartoonist has created the beautiful and excellent cartoons for this book.
Story: Reinhard Renneberg, Viola Berkling, Ming Fai Chow (cartoons)
Graphic layout and illustration on academic pages: Dascha Süßbier
Cartoon coloring: Steffi Kaiser