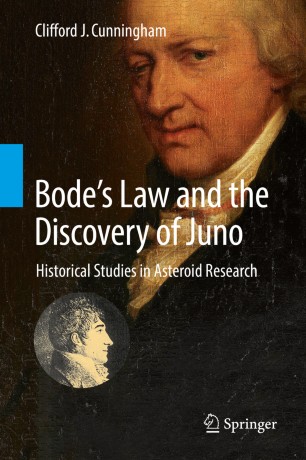 Bode’s Law and the Discovery of Juno

Johann Bode developed a so-called law of planetary distances best known as Bode’s Law. The story of the discovery of Juno in 1804 by Karl Harding tells how Juno fit into that scheme and is examined as it relates to the philosopher Georg Hegel’s 1801 thesis that there could be no planets between Mars and Jupiter. By 1804 that gap was not only filled but had three residents: Ceres, Pallas and Juno!

When Juno was discovered no one could have imagined its study would call into question Newton’s law of gravity, or be the impetus for developing the mathematics of the fast Fourier transform by Carl Gauss. Clifford Cunningham, a dedicated scholar, opens to scrutiny this critical moment of astronomical discovery, continuing the story of asteroid begun in earlier volumes of this series.

The fascinating issues raised by the discovery of Juno take us on an extraordinary journey. The revelation of the existence of this new class of celestial bodies transformed our understanding of the Solar System, the implications of which are thoroughly discussed in terms of Romantic Era science, philosophy, poetry, mathematics and astronomy.

The account given here is based on both English and foreign correspondence and scientific papers, most of which are translated for the first time.