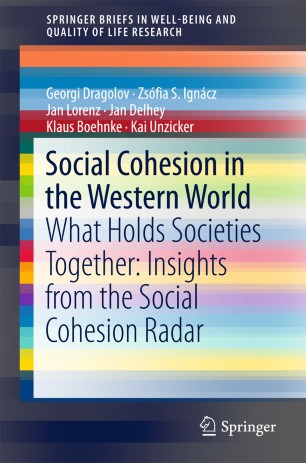 Social Cohesion in the Western World

What Holds Societies Together: Insights from the Social Cohesion Radar

Many people in the Western world are concerned that the social fabric of societies is fraying. This book constitutes the first-of-its-kind systematic account of social cohesion, from theory through methodology to empirical evidence. Readers are introduced to the academically developed Social Cohesion Radar of Bertelsmann Stiftung, a globally active non-governmental organization. The Social Cohesion Radar defines and measures cohesion as characterized by three core aspects: resilient social relations, positive emotional connectedness between people and the community, and a pronounced focus on the common good. Using high-quality academic and institutional data sources, the Social Cohesion Radar provides insights into the level and development of social cohesion over a period of almost 25 years internationally, among 34 European Union and OECD members, and regionally, among the 16 federal states of Germany. It further provides insights into what influences cohesion, and what cohesion is good for. One of the key findings is that social cohesion promotes a happier life for everyone.