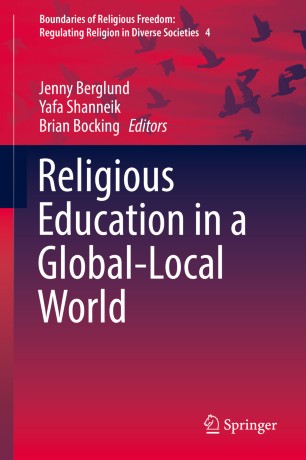 Religious Education in a Global-Local World

This book examines Religious Education (RE) in over ten countries, including Australia, Indonesia, Mali, Russia, UK, Ireland, USA, and Canada. Investigating RE from a global and multi-interdisciplinary perspective, it presents research on the diverse past, present, and possible future forms of RE. In doing so, it enhances public and professional understanding of the complex issues and debates surrounding RE in the wider world. The volume emphasizes a student-centred approach, viewing any kind of ‘RE’, or its absence, as a formative lived experience for pupils. It stresses a bottom-up, sociological and ethnographic/anthropological research-based approach to the study of RE, rather than the ‘top down’ approaches which often start from prescriptive legal, ideological or religious standpoints.   The twelve chapters in this volume regard RE as an entity that has multiple and contested meanings and interpretations that are constantly negotiated. For some, ‘RE’ means religious nurturing, either tailored to parental views or meant to inculcate a uniform religiosity. For others, RE means learning about the many religious and non-religious world-views and secular ethics that exist, not promoting one religion or another. Some seek to avoid the ambiguous term ‘religious education’, replacing it with terms such as ‘education about religions and beliefs’ or ‘the religious dimension of intercultural education’.