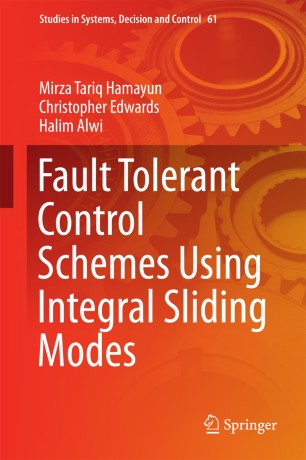 Part of the Studies in Systems, Decision and Control book series (SSDC, volume 61)

The key attribute of a Fault Tolerant Control (FTC) system is its ability to maintain overall system stability and acceptable performance in the face of faults and failures within the feedback system. In this book Integral Sliding Mode (ISM) Control Allocation (CA) schemes for FTC are described, which have the potential to maintain close to nominal fault-free performance (for the entire system response), in the face of actuator faults and even complete failures of certain actuators. Broadly an ISM controller based around a model of the plant with the aim of creating a nonlinear fault tolerant feedback controller whose closed-loop performance is established during the design process. The second approach involves retro-fitting an ISM scheme to an existing feedback controller to introduce fault tolerance. This may be advantageous from an industrial perspective, because fault tolerance can be introduced without changing the existing control loops. A high fidelity benchmark model of a large transport aircraft is used to demonstrate the efficacy of the FTC schemes. In particular a scheme based on an LPV representation has been implemented and tested on a motion flight simulator.