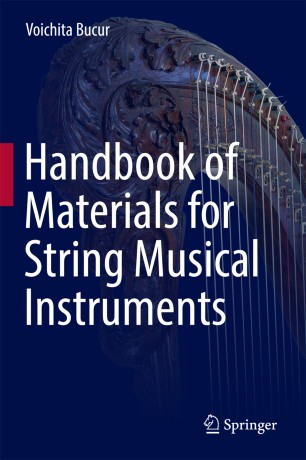 This book addresses core questions about the role of materials in general and of wood in particular in the construction of string instruments used in the modern symphony orchestra – violins, violas, cellos and basses. Further attention is given to materials for classical guitars, harps, harpsichords and pianos. While some of the approaches discussed are traditional, most of them depend upon new scientific approaches to the study of the structure of materials, such as for example wood cell structure, which is visible only using modern high resolution microscopic techniques. Many examples of modern and classical instruments are examined, together with the relevance of classical techniques for the treatment of wood. Composite materials, especially designed for soundboards could be a good substitute for some traditional wood species. The body and soundboard of the instrument are of major importance for their acoustical properties, but the study also examines traditional and new wood species used for items such as bows, the instrument neck, string pegs, etc. Wood species’ properties for musical instruments and growth origins of woods used by great makers such as Antonio Stradivari are examined and compared with more recently grown woods available to current makers. The role of varnish in the appearance and acoustics of the final instrument is also discussed, since it has often been proposed as a ‘secret ingredient’ used by great makers. Aspects related to strings are commented.
As well as discussing these subjects, with many illustrations from classical and contemporary instruments, the book gives attention to conservation and restoration of old instruments and the physical results of these techniques. There is also discussion of the current value of old instruments both for modern performances and as works of art having great monetary value.
The book will be of interest and value to researchers, advanced students, music historians, and contemporary string instrument makers. Musicians in general, particularly those playing string instruments, will also find its revelations fascinating. It will also attract the attention of those using wood for a variety of other purposes, for its use in musical instruments uncovers many of its fundamental features.
Professor Neville H. Fletcher
Australian National University, Canberra