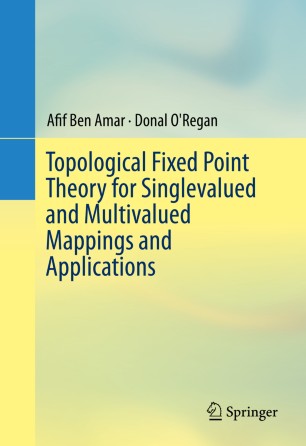 This is a monograph covering topological fixed point theory for several classes of single and multivalued maps. The authors begin by presenting basic notions in locally convex topological vector spaces. Special attention is then devoted to weak compactness, in particular to the theorems of Eberlein–Šmulian, Grothendick and Dunford–Pettis. Leray–Schauder alternatives and eigenvalue problems for decomposable single-valued nonlinear weakly compact operators in Dunford–Pettis spaces are considered, in addition to some variants of Schauder, Krasnoselskii, Sadovskii, and Leray–Schauder type fixed point theorems for different classes of weakly sequentially continuous operators on general Banach spaces. The authors then proceed with an examination of Sadovskii, Furi–Pera, and Krasnoselskii fixed point theorems and nonlinear Leray–Schauder alternatives in the framework of weak topologies and involving multivalued mappings with weakly sequentially closed graph. These results are formulated in terms of axiomatic measures of weak noncompactness.
The authors continue to present some fixed point theorems in a nonempty closed convex of any Banach algebras or Banach algebras satisfying a sequential condition (P) for the sum and the product of nonlinear weakly sequentially continuous operators, and illustrate the theory by considering functional integral and partial differential equations. The existence of fixed points, nonlinear Leray–Schauder alternatives for different classes of nonlinear (ws)-compact operators (weakly condensing, 1-set weakly contractive, strictly quasi-bounded) defined on an unbounded closed convex subset of a Banach space are also discussed. The authors also examine the existence of nonlinear eigenvalues and eigenvectors, as well as the surjectivity of quasibounded operators. Finally, some approximate fixed point theorems for multivalued mappings defined on Banach spaces. Weak and strong topologies play a role here and both bounded and unbounded regions are considered. The authors explicate a method developed to indicate how to use approximate fixed point theorems to prove the existence of approximate Nash equilibria for non-cooperative games.
Fixed point theory is a powerful and fruitful tool in modern mathematics and may be considered as a core subject in nonlinear analysis. In the last 50 years, fixed point theory has been a flourishing area of research. As such, the monograph begins with an overview of these developments before gravitating towards topics selected to reflect the particular interests of the authors.