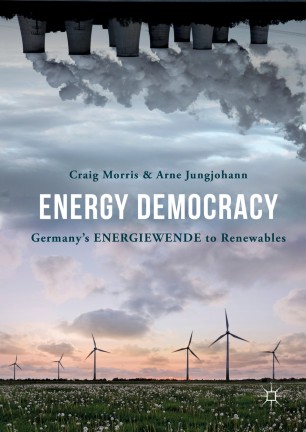 This book offers an accessible overview of how Germans convinced their politicians to pass laws allowing citizens to make their own energy, even when it hurt utility companies to do so. It traces the origins of the Energiewende movement in Germany from the Power Rebels of Schönau to German Chancellor Angela Merkel’s shutdown of eight nuclear power plants following the 2011 Fukushima nuclear accident. The authors explore how, by taking ownership of energy efficiency at a local level, community groups are key actors in the bottom-up fight against climate change. Individually, citizens might install solar panels on their roofs, but citizen groups can do much more: community wind farms, local heat supply, walkable cities and more. This book offers evidence that the transition to renewables is a one-time opportunity to strengthen communities and democratize the energy sector – in Germany and around the world.
Craig Morris is Contributing Editor of Renewables International and lead author at EnergyTransition.de. He has served as editor of IRENA’s REmap report and Greenpeace’s Energy (R)evolution in addition to translating several major German books on renewables into English. In 2014, he won the IAEE prize for journalism in energy economics.
Arne Jungjohann is an author, consultant and political scientist. He served as a strategic advisor for the Minister President of Baden-Württemberg and in the Deutscher Bundestag. Based in Washington DC for several years, he fostered transatlantic dialogue on climate and energy matters. He lives with his family in Stuttgart.