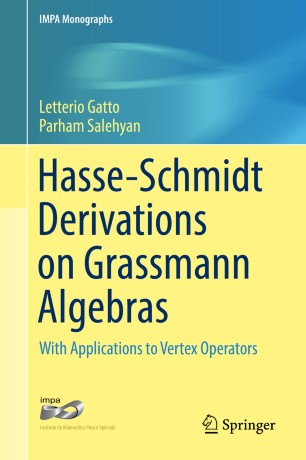 With Applications to Vertex Operators

This book provides a comprehensive advanced multi-linear algebra course based on the concept of Hasse-Schmidt derivations on a Grassmann algebra (an analogue of the Taylor expansion for real-valued functions), and shows how this notion provides a natural framework for many ostensibly unrelated subjects: traces of an endomorphism and the Cayley-Hamilton theorem, generic linear ODEs and their Wronskians, the exponential of a matrix with indeterminate entries (Putzer's method revisited), universal decomposition of a polynomial in the product of two monic polynomials of fixed smaller degree, Schubert calculus for Grassmannian varieties, and vertex operators obtained with the help of Schubert calculus tools (Giambelli's formula). Significant emphasis is placed on the characterization of decomposable tensors of an exterior power of a free abelian group of possibly infinite rank, which then leads to the celebrated Hirota bilinear form of the Kadomtsev-Petviashvili (KP) hierarchy describing the Plücker embedding of an infinite-dimensional Grassmannian. By gathering ostensibly disparate issues together under a unified perspective, the book reveals how even the most advanced topics can be discovered at the elementary level.