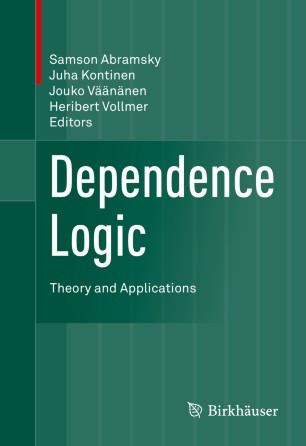 In this volume, different aspects of logics for dependence and independence are discussed, including both the  logical and computational aspects of dependence logic, and also applications  in a number of areas, such as statistics, social choice theory, databases, and computer security.  The contributing authors represent leading experts in this relatively new field, each of whom was invited to write a chapter based on talks given at seminars held at the Schloss Dagstuhl Leibniz Center for Informatics in Wadern, Germany (in February 2013 and June 2015) and an Academy Colloquium at the Royal Netherlands Academy of Arts and Sciences (March 2014).  Altogether, these chapters provide the most up-to-date look at this developing and highly interdisciplinary field and will be of interest to a broad group of logicians, mathematicians, statisticians, philosophers, and scientists. Topics covered include