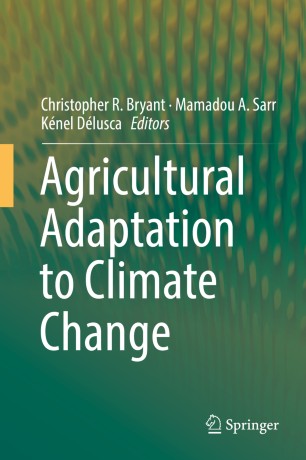 This book deals with one of the major challenges facing human society and its governments, climate change and variability. The principal objective of the book is to explore how agricultural production through the actions primarily of farmers, including peasant farmers, adapt to these changing circumstances, what the limitations of adaptation are, how the process of adaptation varies between different territories (e.g. developed countries versus developing countries), and what are or can be the most effective roles for actors other than the farmers, including different levels of government and non-governmental organizations (NGOs) such as professional associations of farmers and community organizations.

The principal argument is threefold: 1) while there are significant differences between territories and countries in terms of the capacity of farmers (and the other actors) to engage in capacity building to be able to adapt effectively to climate change and variability, 2) the critical roles are those played out by the farmers themselves, but that 3) other actors can play an important role in accompanying farmers in their adaptation process, providing relevant and strategic information, counseling them and facilitating networking and meetings when appropriate. This effectively means that without engaging in the local adaptation processes governments can really only play effective roles by working with other actors at the local and regional levels. When it occurs, it can be very effective, but when it does not, farmers are left to their own devices (and even then, many are able to use their own creativity and local knowledge to survive and continue to develop).

Essentially therefore, the secondary argument that is followed throughout the book is that adaptation is essentially a social process that requires an understanding of social processes and dynamics in each farming community and territory. It involves an understanding, for instance, of information diffusion processes in the different farming communities and territories, which provides a set of tools to promote and facilitate the adoption process in the context of adaptation to climate change and variability.

Christopher Bryant received his doctorate in 1970 at the London School of Economics and Political Science (LSE), London. He was progressively Assistant, Associate and Full Professor in Geography at the University of Waterloo (1970 à 1990), then Full Professor  in Geography the Université de Montréal (1990 à 2014), and is now Adjunct Profesor in Geography at the Université de Montréal and also in the School of Environmental Design and Rural Planning, University of Guelph. He is one of the international leaders in research on urban/periurban agricultures (Canada, Western Europe and elsewhere, and he is also a recognized leader in the domain of adaptation of human activities (and especially agriculture) to climate change and variability, in local and community development, and in the strategic planning for local and regional development for and by citizens.

Mamadou Adama Sarr received his PhD from the Université Jean Moulin Lyon III, France. His current affiliation is as a Researcher with the Centre de Suivi Écologique, Dakar, Senegal. He was also a post-doctoral Fellow in the Laboratory of Sustainable Development and Territorial Dynamics, Geography at the Université de Montréal. His research interests are in climatology, climate Change, regional climate modeling, climate variability and extreme, Geographic Information Systems and Socio-Ecological Systems.