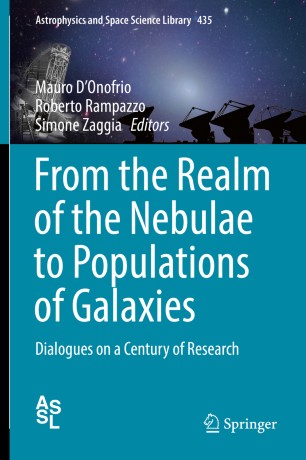 From the Realm of the Nebulae to Populations of Galaxies

Dialogues on a Century of Research

In order to outline possible future directions in galaxy research, this book wants to be a short stopover, a moment of self-reflection of the past century of achievements in this area.

Since the pioneering years of galaxy research in the early 20th century, the research on galaxies has seen a relentless advance directly connected to the parallel exponential growth of new technologies.

Through a series of interviews with distinguished astronomers the editors provide a snapshot of the achievements obtained in understanding galaxies. While many initial questions about their nature have been addressed, many are still open and require new efforts to achieve a solution. The discussions may reveal paradigms worthwhile revisiting. With the help of some of those scientists who have contributed to it, the editors sketch the history of this scientific journey and ask them for inspirations for future directions of galaxy research.