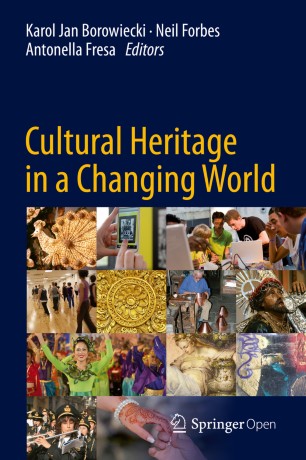 Cultural Heritage in a Changing World

The central purpose of this collection of essays is to make a creative addition to the debates surrounding the cultural heritage domain. In the 21st century the world faces epochal changes which affect every part of society, including the arenas in which cultural heritage is made, held, collected, curated, exhibited, or simply exists. The book is about these changes; about the decentring of culture and cultural heritage away from institutional structures towards the individual; about the questions which the advent of digital technologies is demanding that we ask and answer in relation to how we understand, collect and make available Europe’s cultural heritage. Cultural heritage has enormous potential in terms of its contribution to improving the quality of life for people, understanding the past, assisting territorial cohesion, driving economic growth, opening up employment opportunities and supporting wider developments such as improvements in education and in artistic careers. Given that spectrum of possible benefits to society, the range of studies that follow here are intended to be a resource and stimulus to help inform not just professionals in the sector but all those with an interest in cultural heritage.

Karol Jan Borowiecki is Associate Professor at the Department of Business and Economics at the University of Southern Denmark. He holds a PhD in Economics from Trinity College Dublin and a PhD in Economic History from Lund University. His research focuses primarily on cultural economics and economic history, but much of his work also touches on urban economics (creative clusters) and labor economics (especially the migration of creative people). He has published, among others, in the Review of Economics and Statistics, Journal of Urban Economics, Journal of Cultural Economics, European Review of Economic History and Oxford Economic Papers. He is the recipient of several academic prizes and grants, sits on the executive board of the Association for Cultural Economics International and is co-founder and co-editor of EconomistsTalkArt.org – a platform aimed at the dissemination of research-based policy analysis and commentary by cultural economists.

Neil Forbes is Professor of International History at Coventry University, and Co-ordinator of the FP7 RICHES project - Renewal, Innovation and Change: Heritage and European Society. His research interests and publications lie in the following fields: conflict heritage, contested landscapes and the memorialisation of war; creative archiving and cultural heritage; the processes of financial stabilisation in Europe after the First World War; Anglo-American relations and the rise of the Third Reich; the interaction of foreign policy formulation and diplomacy with the business practices of multinational enterprise during the interwar years. He has played a leading role in a number of EU and UK research projects, including a £1m digitisation project in association with BT and The National Archives.

Antonella Fresa is Director and Administrator of company Promoter Srl, she is an ICT expert and has been working on European cooperation projects since 1994. Since 2002, Technical Coordinator and  Communication Manager of several national and European projects in the domains of digital cultural heritage, smart cities, digital preservation, e-Infrastructures. From 2002 to 2012, advisor of the Italian Ministry of Cultural Heritage and Activities. From 1999 to 2002, Project Officer at the European Commission. Previously, researcher in the industry, and at Olivetti in Pisa, Ivrea and Cupertino (CA, USA). She regularly serves as independent expert for the European Commission and national research programmes. Author of articles about multilingual access to digital cultural Heritage, geo-coded digital cultural content, digital preservation. Enterprise Fellow at Coventry University. Project Manager of Digitalmeetsculture.net, the online communication platform powered by Promoter Srl.

“Cultural Heritage in a Changing World contributes to deepen and expand the debate about the current evolution of the role of cultural heritage in societies on several directions. … book primarily provides a European perspective to the changes occurring in the cultural heritage domain. … given the pervasive and rapid adoption of digital technologies worldwide, much of the reflections and findings presented in this book can be useful for cultural heritage practitioners and scholars in other parts of the world.” (Enrico Bertacchini, Journal of Cultural Economy, Vol. 41, 2017)

“The book gives a comprehensive view on issues of cultural heritage and digital technologies. … the collection does give an excellent illustration of how the digital age has changed cultural heritage and museums, as well as the methods of adapting to these changes. … this book is relatively easy to understand, making it suitable not just for professionals, but also students and enthusiasts of the field.” (Ashika Prajnya Paramita, Humaniora, Vol. 28 (3), October, 2016)
PDF
EPUB