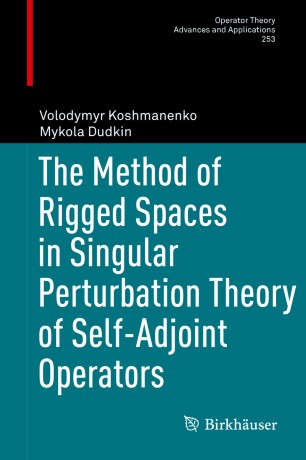 This monograph presents the newly developed method of rigged Hilbert spaces as a modern approach in singular perturbation theory. A key notion of this approach is the Lax-Berezansky triple of Hilbert spaces embedded one into another, which specifies the well-known Gelfand topological triple.

All kinds of singular interactions described by potentials supported on small sets (like the Dirac δ-potentials, fractals, singular measures, high degree super-singular expressions) admit a rigorous treatment only in terms of the equipped spaces and their scales. The main idea of the method is to use singular perturbations to change inner products in the starting rigged space, and the construction of the perturbed operator by the Berezansky canonical isomorphism (which connects the positive and negative spaces from a new rigged triplet). The approach combines three powerful tools of functional analysis based on the Birman-Krein-Vishik theory of self-adjoint extensions of symmetric operators, the theory of singular quadratic forms, and the theory of rigged Hilbert spaces.

The book will appeal to researchers in mathematics and mathematical physics studying the scales of densely embedded Hilbert spaces, the singular perturbations phenomenon, and singular interaction problems.