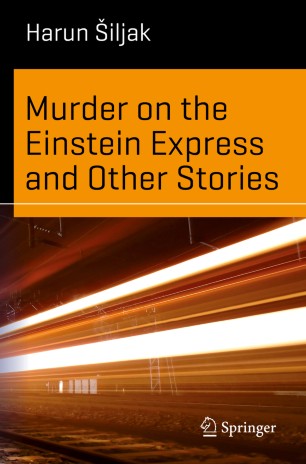 Murder on the Einstein Express and Other Stories

This collection of stories touches upon many genres: Normed Trek is a clever and witty Alice-in-Wonderland-type narrative set in the realm of mathematical analysis, The Cantor Trilogy is a dystopia about the consequences of relying upon computer-based mathematical proofs, In Search of Future Time bears the flavor of Tales from Arabian Nights set in the future, and – last but not least - Murder on the Einstein Express is a short, non-technical primer on probabilities and modern classical physics, disguised as a detective story.

Written primarily for an audience with some background or a strong interest in mathematics, physics and computer science (in particular artificial intelligence), these stories explore the boundaries between science and fiction in a refreshingly unconventional fashion. In the Afterthoughts the author provides some further insights and annotations.

Harun Šiljak got his BoEE and MoEE degrees at the Department of Control and Electronics, University of Sarajevo and his PhD in Signal Processing at the Electrical and Electronics Engineering Department, International Burch University, Sarajevo, where he is currently an assistant professor.  He has been working in basic sciences (mathematics and physics) since elementary school, qualifying twice for the International Mathematical Olympiad and once for the International Physics Olympiad. Some of his science fiction and popular science stories have been published in the Mathematical Intelligencer and in the Journal of Humanistic Mathematics.