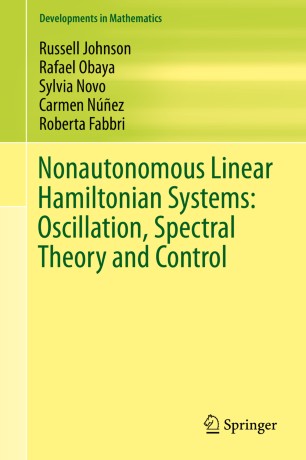 Part of the Developments in Mathematics book series (DEVM, volume 36)

This monograph contains an in-depth analysis of the dynamics given by a linear Hamiltonian system of general dimension with nonautonomous bounded and uniformly continuous coefficients, without other initial assumptions on time-recurrence. Particular attention is given to the oscillation properties of the solutions as well as to a spectral theory appropriate for such systems. The book contains extensions of results which are well known when the coefficients are autonomous or periodic, as well as in the nonautonomous two-dimensional case. However, a substantial part of the theory presented here is new even in those much simpler situations.
The authors make systematic use of basic facts concerning Lagrange planes and symplectic matrices, and apply some fundamental methods of topological dynamics and ergodic theory. Among the tools used in the analysis, which include Lyapunov exponents, Weyl matrices, exponential dichotomy, and weak disconjugacy, a fundamental role is played by the rotation number for linear Hamiltonian systems of general dimension. The properties of all these objects form the basis for the study of several themes concerning linear-quadratic control problems, including the linear regulator property, the Kalman-Bucy filter, the infinite-horizon optimization problem, the nonautonomous version of the Yakubovich Frequency Theorem, and dissipativity in the Willems sense.
The book will be useful for graduate students and researchers interested in nonautonomous differential equations; dynamical systems and ergodic theory; spectral theory of differential operators; and control theory.