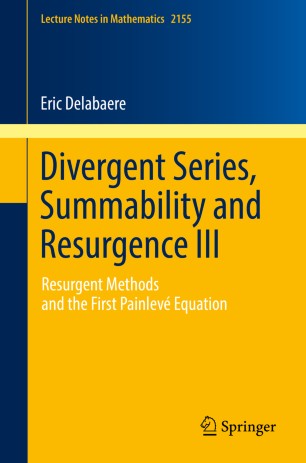 The aim of this volume is two-fold. First, to show how the resurgent methods introduced in volume 1 can be applied efficiently in a non-linear setting; to this end further properties of the resurgence theory must be developed. Second, to analyze the fundamental example of the First Painlevé equation. The resurgent analysis of singularities is pushed all the way up to the so-called “bridge equation”, which concentrates all information about the non-linear Stokes phenomenon at infinity of the First Painlevé equation.

The third in a series of three, entitled Divergent Series, Summability and Resurgence, this volume is aimed at graduate students, mathematicians and theoretical physicists who are interested in divergent power series and related problems, such as the Stokes phenomenon. The prerequisites are a working knowledge of complex analysis at the first-year graduate level and of the theory of resurgence, as presented in volume 1.