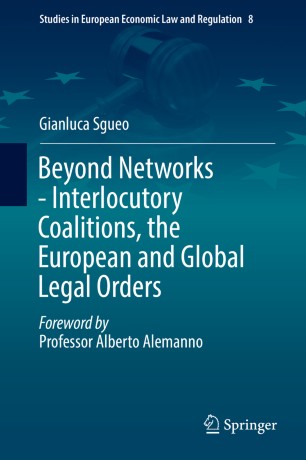 Beyond Networks - Interlocutory Coalitions, the European and Global Legal Orders

This book explores the activism promoted by organised networks of civil society actors in opening up possibilities for more democratic supranational governance. It examines the positive and negative impact that such networks of civil society actors – named “interlocutory coalitions” – may have on the convergence of principles of administrative governance across the European legal system and other supranational legal systems.

The book takes two main controversial aspects into account: the first relates to the convergence between administrative rules pertaining to different supranational regulatory systems. Traditionally, the spread of methods of administrative governance has been depicted primarily against the background of the interactions between the domestic and the supranational arena, both from a top-down and bottom-up perspective. However, the exploration of interactions occurring at the supranational level between legal regimes is still not grounded on adequate empirical evidence. The second controversial aspect considered in this book consists of the role of civil society actors operating at the supranational level. In its discussion of the first aspect, the book focuses on the relations between the European administrative law and the administrative principles of law pertaining to other supranational regulatory regimes and regulators, including the World Bank, the International Monetary Fund, the World Trade Organization, the United Nations, the Organization for Economic Cooperation and Development, the Asian Development Bank, and the Council of Europe. The examination of the second aspect involves the exploration of the still little examined, but crucial, role of civil society organised networks in shaping global administrative law. These “interlocutory coalitions” include NGOs, think tanks, foundations, universities, and occasionally activists with no formal connections to civil society organisations. The book describes such interlocutory coalitions as drivers of harmonized principles of participatory democracy at the European and global levels. However, interlocutory coalitions show a number of tensions (e.g. the governability of coalitions, the competition among them) that may hamper the impact they have on the reconfiguration of individuals’ rights, entitlements and responsibilities in the global arena.