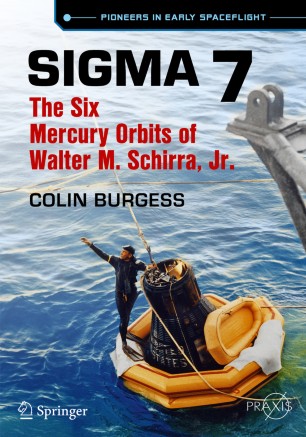 Colin Burgess offers a comprehensive yet personal look at the 1962 orbital mission of Wally Schirra aboard the spacecraft Sigma 7, the first book about this popular pioneering astronaut which explores his entire life and accomplishments. This continues the author's attempt to fully document the record of Project Mercury's pioneering early phase of the Space Age.

Schirra’s pre-NASA life is examined, as well as his training as a NASA astronaut and for his Mercury MA-8 flight. The 6-orbit flight of Sigma 7 is fully covered from its origins through to the spacecraft’s safe recovery from the ocean after a highly successful Mercury mission. Schirra’s participation on the Gemini 6 and Apollo 7 missions is also told, but in brief, and the book also relates his post-NASA life and activities through to his passing in 2007. The Mercury Seven occupy a unique spot in the history of human spaceflight, and Schirra is at last given his due as one of the contributing astronauts in this painstakingly researched book.

Colin Burgess’s first book, “The Diggers of Colditz” was published simultaneously in the U.K. and Australia in 1985.  His next few books were on the Australian prisoner-of –war experience and then he turned his efforts to writing about his principal interest: human space exploration. Colin has written a number of books on the subject for the University of Nebraska Press and Springer-Praxis. The books he has written or co-authored for Springer-Praxis are “NASA’s Scientist-Astronauts,” “Animals in Space,” “The First Soviet Cosmonaut Team,” “Selecting the Mercury Seven,” “Moon Bound,” “Freedom 7,” “Liberty Bell 7,” “Friendship 7,” and “Aurora 7”.  Colin also wrote a new book on the Interkosmos program along with co-author Bert Vis, and is preparing a history of NASA’s Group 5 and 7 astronauts with co-author David J. Shayler. In addition, he is the series editor and sometimes author for the Outward Odyssey series of books on the social history of space exploration for the University of Nebraska Press.

“This book includes an early biography for Schirra and details of the Sigma 7 spaceflight, with the events leading up to the flight and post-flight activities. The author includes many outstanding and interesting historical photographs, such as mission training, publicity photos of the Mercury astronauts, and visits with President John F. Kennedy. This book will make a great addition to the library of any enthusiasts interested in the history of the space program. Summing Up: Recommended. All readers.” (J. Z. Kiss, Choice, Vol. 54 (5), January, 2017)
Buy options