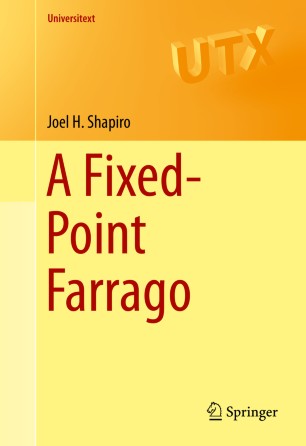 This text provides an introduction to some of the best-known fixed-point theorems, with an emphasis on their interactions with topics in analysis.  The level of exposition increases gradually throughout the book, building from a basic requirement of undergraduate proficiency to graduate-level sophistication. Appendices provide an introduction to (or refresher on) some of the prerequisite material and exercises are integrated into the text, contributing to the volume’s ability to be used as a self-contained text. Readers will find the presentation especially useful for independent study or as a supplement to a graduate course in fixed-point theory.

The material is split into four parts: the first introduces the Banach Contraction-Mapping Principle and the Brouwer Fixed-Point Theorem, along with a selection of interesting applications; the second focuses on Brouwer’s theorem and its application to John Nash’s work; the third applies Brouwer’s theorem to spaces of infinite dimension; and the fourth rests on the work of Markov, Kakutani, and Ryll–Nardzewski surrounding fixed points for families of affine maps.

Joel H. Shapiro is an adjunct professor of Mathematics and Statistics at Portland State University. He received his PhD from the University of Michigan.

“This is a well-written and essentially self-contained survey on several applications of fixed-point theory. … The book makes easy reading because the proofs are remarkably well structured. They are broken up into easily digestible parts and the claims are always clearly stated. There are five appendices which help to make the book almost self-contained.” (Christian Fenske, zbMATH 1352.47002, 2017)

“The chapters provide models for students to appreciate the art of a well-thought out seminar talk … on a particular topic or theme. There are also a variety of exercises integrated into the lectures, ‘to encourage active participation’, which allow the text to be used for a course or an independent study. … The book appears to be written to engage a young audience, yet there is more in it to provide pleasure to mathematicians further on in their career.” (Tushar Das, Maa Reviews, maa.org, October, 2016)