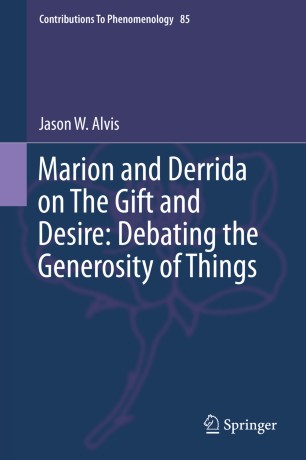 Marion and Derrida on The Gift and Desire: Debating the Generosity of Things

Part of the Contributions To Phenomenology book series (CTPH, volume 85)

This book examines the various encounters between Jean-Luc Marion and Jacques Derrida on “the gift,” considers their many differences on “desire,” and demonstrates how these topics hold the keys to some of phenomenology’s most pressing structural questions, especially regarding “deconstructive” approaches within the field.  The book claims that the topic of desire is a central lynchpin to understanding the two thinkers’ conflict over the gift, for the gift is reducible to the “desire to give,” which initiates a turn to the topic of “generosity.”  To what degree might loving also imply giving? How far might it be suggested that love is reducible to desire and intentionality? It is demonstrated how Derrida (the generative “father” of deconstruction) rejects the possibility of any potential relation between the gift and desire on the account that desire is bound to calculative repetition, economical appropriation, and subject-centered interests that hinder deconstruction.  Whereas Marion (a representative of the phenomenological tradition) demands a unique union between the gift and desire, which are both represented in his “reduction to givenness” and “erotic reduction.”The book is the first extensive attempt to contextualize the stark differences between Marion and Derrida within the phenomenological legacy (Husserl, Heidegger, Kant), supplies readers with in-depth accounts of the topics of the gift, love, and desire, and demonstrates another means through which the appearing of phenomena might be understood, namely, according to the generosity of things.