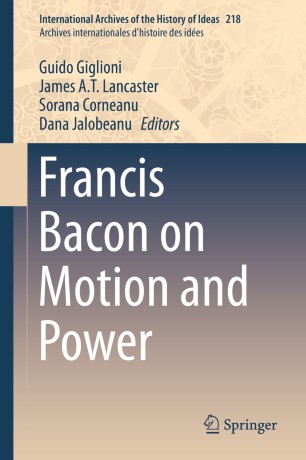 Francis Bacon on Motion and Power

This book offers a comprehensive and unitary study of the philosophy of Francis Bacon, with special emphasis on the medical, ethical and political aspects of his thought. It presents an original interpretation focused on the material conditions of nature and human life. In particular, coverage in the book is organized around the unifying theme of Bacon’s notion of appetite, which is considered in its natural, ethical, medical and political meanings. The book redefines the notions of experience and experiment in Bacon’s philosophy of nature, shows the important presence of Stoic themes in his work as well as provides an original discussion of the relationships between natural magic, prudence and political realism in his philosophy. Bringing together scholarly expertise from the history of philosophy, the history of science and the history of literature, this book presents readers with a rich and diverse contextualization of Bacon’s philosophy.