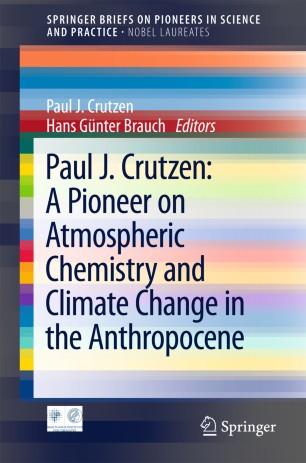 Paul J. Crutzen: A Pioneer on Atmospheric Chemistry and Climate Change in the Anthropocene

Part of the SpringerBriefs on Pioneers in Science and Practice book series (BRIEFSPIONEER, volume 50)

This book contains texts by the Nobel laureate Paul J. Crutzen who is best known for his research on ozone depletion. It comprises Crutzen’s autobiography, several pictures documenting important stages of his life, and his most important scientific publications. The Dutch atmospheric chemist is one of the world’s most cited scientists in geosciences. His political engagement makes him a tireless ambassador for environmental issues such as climate change. He popularized the term ‘Anthropocene’ for the current geological era acknowledging the enduring influence of humankind on planet Earth. This concept conceives humans to be a geologic factor, influencing the evolution of our globe and the living beings populating it. The selection of texts is representing Paul Crutzen´s scientific oeuvre as his research interests span from ozone depletion to the climatic impacts of biomass burning, the consequences of a worldwide atomic war – the Nuclear Winter - to geoengineering and the Anthropocene.