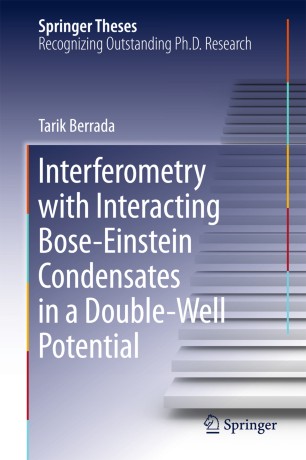 Interferometry with Interacting Bose-Einstein Condensates in a Double-Well Potential

This thesis demonstrates a full Mach–Zehnder interferometer with interacting Bose–Einstein condensates confined on an atom chip. It relies on the coherent manipulation of atoms trapped in a magnetic double-well potential, for which the author developed a novel type of beam splitter. Particle-wave duality enables the construction of interferometers for matter waves, which complement optical interferometers in precision measurement devices, both for technological applications and fundamental tests. This requires the development of atom-optics analogues to beam splitters, phase shifters and recombiners.

Particle interactions in the Bose–Einstein condensate lead to a nonlinearity, absent in photon optics. This is exploited to generate a non-classical state with reduced atom-number fluctuations inside the interferometer. This state is then used to study the interaction-induced dephasing of the quantum superposition. The resulting coherence times are found to be a factor of three longer than expected for coherent states, highlighting the potential of entanglement as a resource for quantum-enhanced metrology.

Tarik Berrada studied physics and applied mathematics in Paris and Vienna. In 2009, he joined the group of Jörg Schmiedmayer at the Vienna University of Technology and worked for his PhD thesis on interferometry with trapped atomic Bose-Einstein condensates. After a post-doc in the same group, Tarik Berrada is now working on developing new forecast models for the energy market.