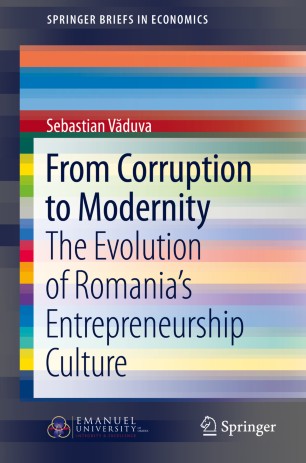 From Corruption to Modernity

The Evolution of Romania's Entrepreneurship Culture

This volume examines corruption and provides tools and that can be utilized to combat it and encourage development. Using Romania as a case study, the authors argue that corruption can be reduced via institutional reforms and effective civic education. Describing various causes and types of corruption, the authors explore the causes and influences that result in corruption and the current political and bureaucratic practices that inhibit social, political or economic reform.

The nations of Europe, including Romania, have different civil traditions varying in their intensity, cultural heritage, scope of activity, religious or non-religious affiliation, among other factors. Western Europe has experienced over a century of modern government involvement crowding out the efforts of traditional civil society, while Romania, along with the other Eastern nations of the former Soviet bloc, experienced almost a half-century of systematic efforts by communist regimes to eradicate and control all spheres of voluntary, nongovernmental civil life. Moreover, the inexperience and immaturity of Romanian society in the early transition period after communism, particularly its so-called “entrepreneurial class,” have discredited and abused the concept of civil society, utilizing it solely for tax benefits and selfish purposes. Having had to learn the hard way about some of the key aspects of public administration often taken for granted in other countries more experienced in democratic participation, Romania has most recently made significant progress toward overcoming corruption and implementing reforms and policies that will allow it to participate more fully in the global arena.