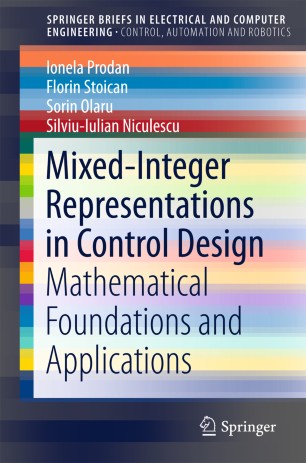 In this book, the authors propose efficient characterizations of the non-convex regions that appear in many control problems, such as those involving collision/obstacle avoidance and, in a broader sense, in the description of feasible sets for optimization-based control design involving contradictory objectives.

The text deals with a large class of systems that require the solution of appropriate optimization problems over a feasible region, which is neither convex nor compact. The proposed approach uses the combinatorial notion of hyperplane arrangement, partitioning the space by a finite collection of hyperplanes, to describe non-convex regions efficiently. Mixed-integer programming techniques are then applied to propose acceptable formulations of the overall problem. Multiple constructions may arise from the same initial problem, and their complexity under various parameters - space dimension, number of binary variables, etc. - is also discussed.

This book is a useful tool for academic researchers and graduate students interested in non-convex systems working in control engineering area, mobile robotics and/or optimal planning and decision-making.