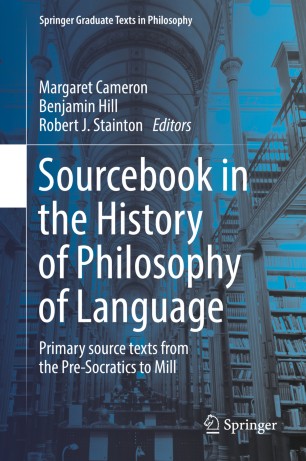 Sourcebook in the History of Philosophy of Language

Primary source texts from the Pre-Socratics to Mill

For the first time in English, this anthology offers a comprehensive selection of primary sources in the history of philosophy of language. Beginning with a detailed introduction contextualizing the subject, the editors draw out recurring themes, including the origin of language, the role of nature and convention in fixing form and meaning, language acquisition, ideal languages, varieties of meanings, language as a tool, and the nexus of language and thought, linking them to representative texts.   The handbook moves on to offer seminal contributions from philosophers ranging from the pre-Socratics up to John Stuart Mill, preceding each major historical section with its own introductory assessment. With all of the most relevant primary texts on the philosophy of language included, covering well over two millennia, this judicious, and generous, selection of source material will be an indispensable research tool for historians of philosophy, as well as for philosophers of language, in the twenty-first century.   A vital tool for researchers and contemporary philosophers, it will be a touchstone for much further research, with coverage of a long and varied tradition that will benefit today’s scholars and enhance their awareness of earlier contributions to the field.