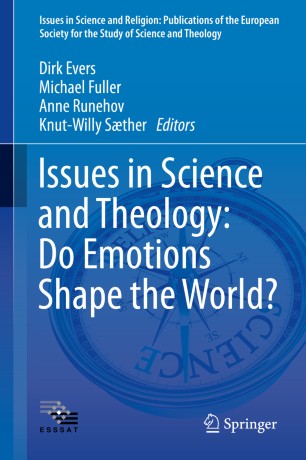 Issues in Science and Theology: Do Emotions Shape the World?

Part of the Issues in Science and Religion: Publications of the European Society for the Study of Science and Theology book series (ESSSAT)

This volume examines emotions and emotional well-being from a rich variety of theological, philosophical and scientific and therapeutic perspectives. To experience emotion is a part of being human; but what are emotions? How can theology, philosophy and the natural sciences unpack the nature and content of emotions? This volume is based on contributions to the 15th European Conference on Science and Theology held in Assisi, Italy. It brings together contributions from scholars of various academic backgrounds from around the world, whose individual insights are made all the richer by their juxtaposition with those from experts in other fields, leading to a unique exchange of ideas.

Michael Fuller has taught science and theology at the University of Edinburgh since 1998. He is the author of a monograph and numerous articles dealing with the interface of science and religion, and he has edited five symposia relating to this subject. He is Chair of the UK Science and Religion Forum, and Vice-President for Publications of the European Society for the Study of Science and Theology. He is an Anglican Priest, and for 15 years was Pantonian Professor at the Theological Institute of the Scottish Episcopal Church. His research interests include ethical issues raised by new and emerging sciences.

Dirk Evers is Professor of Dogmatics and Philosophy of Religion at Martin-Luther-University Halle-Wittenberg, Germany. Before joining Halle University in 2010 as a faculty member, he worked as assistant professor at Tübingen University under Eberhard Jüngel. Since his doctoral thesis on cosmology and doctrine of creation in 2000 he has been doing interdisciplinary work at the intersection of science and theology. Since 2014 he has been president of ESSSAT (European Society for the Study of Science and Theology), and he is managing editor of the journal Philosophy, Theology, and the Sciences.

same university. She is editor in chief for the 4 volume Encyclopedia of Sciences and Religions, Springer 2013. Co-EiC is prof. Lluis Oviedo. She is co-editor of the ESSSAT series Issues in Science and

Religion, Springer. She was also editor in chief for the series Copenhagen University Discussions in Science and Religion, Faculty of Theology publications, Copenhagen until May 2014.She is also field editor for the European Journal of Science and Theology. She is the author of Sacred or Neural? The Potential of Neuroscience to Explain Religious Experiences Vandenhoeck & Ruprecht, 2007, which is based on her doctoral thesis for which she received the 2006 ESSSAT research prize. Furthermore, she has been the director of the Copenhagen Network for Science and Religion 2008-2013), funded by the John Templeton Foundation.She published several peer-reviewed articles. Runehov has mainly (but not merely) been working within the debate of Science and Philosophy of Religion. Her main research interests has been Neuroscience, Cognitive science and Quantum Mechanics which are studied from a perfective of Philosophy of Religion, Philosophy of Mind, Epistemology and Philosophy of Science.

Knut-Willy Sæther is Associate Professor at Volda University College and NLA University College, Bergen, Norway. Sæther received his doctoral degree from the Norwegian University of Technology and Science, Trondheim (2005) on a dissertation in theology and science. His main area of work is in philosophy of religion and he does interdisciplinary work including philosophy, theology, aesthetics and science. He is Scientific Program Officer at European Society for the Studies in Science and Theology (ESSSAT). He has published several books.