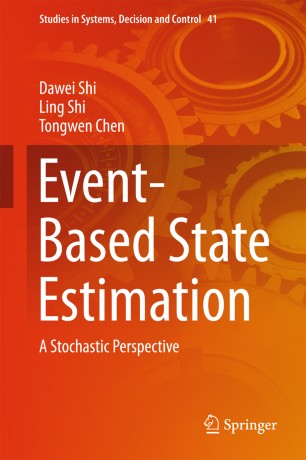 Part of the Studies in Systems, Decision and Control book series (SSDC, volume 41)

This book explores event-based estimation problems. It shows how several stochastic approaches are developed to maintain estimation performance when sensors perform their updates at slower rates only when needed.

The self-contained presentation makes this book suitable for readers with no more than a basic knowledge of probability analysis, matrix algebra and linear systems. The introduction and literature review provide information, while the main content deals with estimation problems from four distinct angles in a stochastic setting, using numerous illustrative examples and comparisons. The text elucidates both theoretical developments and their applications, and is rounded out by a review of open problems.

This book is a valuable resource for researchers and students who wish to expand their knowledge and work in the area of event-triggered systems. At the same time, engineers and practitioners in industrial process control will benefit from the event-triggering technique that reduces communication costs and improves energy efficiency in wireless automation applications.

Dawei Shi was born in Shandong Province, China. He received his B.Eng. degree in Electrical Engineering and its Automation from the Beijing Institute of Technology in 2008. In 2010, he received the financial support from the China Scholarship Council and the Provost Scholarship from the University of Alberta, where he received the Ph.D. degree on control systems in November 2014. From December 2014, he has been appointed as an Associate Professor at the School of Automation, Beijing Institute of Technology, China. In 2009, he received the Best Student Paper Award at the IEEE International Conference on Automation and Logistics.  His research interests include event-based control and estimation, robust model predictive control and tuning, and wireless sensor networks. He has authored or co-authored 18 papers, most of which have been published in the top journals and conferences in the field of control systems. He also applied for a US patent as the first inventor in March 2014, supported by Honeywell Process Solutions, Vancouver. He is a reviewer for a number of international journals and conferences, including Automatica, IEEE Transactions on Automatic Control, Systems & Control Letters, IEEE Conference on Decision and Control, American Control Conference, and IFAC World Congress.

Ling Shi received his B.S. degree in Electrical and Electronic Engineering from the Hong Kong University of Science and Technology in 2002 and Ph.D. degree in Control and Dynamical Systems from California Institute of Technology in 2008. He  is currently an Associate Professor in the  Department of Electronic and Computer Engineering at the Hong Kong University of Science and Technology. His research  interests include modeling and control of cyber-physical systems, and sensor data scheduling and sensor fusion. He has published over 30 journals papers and 60 conference papers. He is a member of the IFAC Technical Committee on Networked Systems since Oct 2011, and served in many conference editorial boards including the 2013, 2014, and 2015 European Control Conference. He currently serves as the secretary and treasurer of the Hong Kong Automatic Control Association for the term 2014-2017.

Tongwen Chen is presently a Professor of Electrical and Computer Engineering at the University of Alberta, Edmonton, Canada. He received the B.Eng. degree in Automation and Instrumentation from Tsinghua University (Beijing) in 1984, and the M.A.Sc. and Ph.D. degrees in Electrical Engineering from the University of Toronto in 1988 and 1991, respectively. He has worked on several research areas related to computer control systems, including sampled-data control, multirate systems, networked control systems, and more recently, event-triggered control, and industrial alarm monitoring.  In these areas, he has co-authored over 100 journal publications, a graduate textbook, "Optimal Sampled-Data Control Systems" (Springer, 1995), and a research monograph, "Capturing Connectivity and Causality in Complex Industrial Processes" (SpringerBrief, 2014). Moreover, some of his research results have been applied and implemented in the Canadian industry, yielding better process operation and safety. He has been an Associate Editor for several international journals, including IEEE Transactions on Automatic Control, Automatica, and Systems and Control Letters. He is a Fellow of IEEE, IFAC, as well as Canadian Academy of Engineering.

“This book addresses essentially the engineers (or researchers and students interested in the area of event-trigged systems). The subject turns around event-based estimation problems in a stochastic setting. This document is self-contained and it is readable with just a basic knowledge of probability theory, Kalman filtering theory, and linear algebra. … This book is clear and well written. The results presented are proven, and each chapter contains notes and references.” (Bénédicte Puig, zbMATH 1331.62010, 2016)