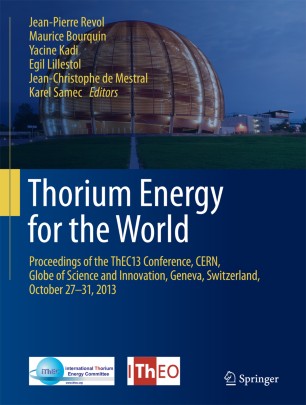 The Thorium Energy Conference (ThEC13) gathered some of the world’s leading experts on thorium technologies to review the possibility of destroying nuclear waste in the short term, and replacing the uranium fuel cycle in nuclear systems with the thorium fuel cycle in the long term. The latter would provide abundant, reliable and safe energy with no CO2 production, no air pollution, and minimal waste production.

The ThEC13 proceedings are a source of reference on the use of thorium for energy generation. They offer detailed technical reviews of the status of thorium energy technologies, from basic R&D to industrial developments.

They also describe how thorium can be used in critical reactors and in subcritical accelerator-driven systems (ADS), answering the important questions:

– Why is thorium so attractive and what is the role of innovation, in particular in the nuclear energy domain?

– What are the national and international R&D programs on thorium technologies and how are they progressing?