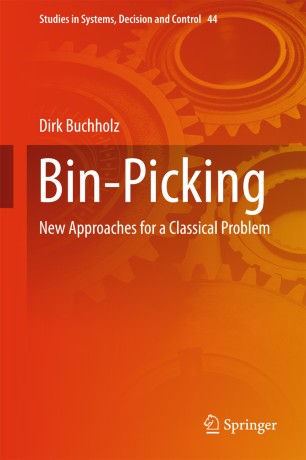 New Approaches for a Classical Problem

Part of the Studies in Systems, Decision and Control book series (SSDC, volume 44)

This book is devoted to one of the most famous examples of automation handling tasks – the “bin-picking” problem. To pick up objects, scrambled in a box is an easy task for humans, but its automation is very complex. In this book three different approaches to solve the bin-picking problem are described, showing how modern sensors can be used for efficient bin-picking as well as how classic sensor concepts can be applied for novel bin-picking techniques. 3D point clouds are firstly used as basis, employing the known Random Sample Matching algorithm paired with a very efficient depth map based collision avoidance mechanism resulting in a very robust bin-picking approach. Reducing the complexity of the sensor data, all computations are then done on depth maps. This allows the use of 2D image analysis techniques to fulfill the tasks and results in real time data analysis. Combined with force/torque and acceleration sensors, a near time optimal bin-picking system emerges. Lastly, surface normal maps are employed as a basis for pose estimation. In contrast to known approaches, the normal maps are not used for 3D data computation but directly for the object localization problem, enabling the application of a new class of sensors for bin-picking.