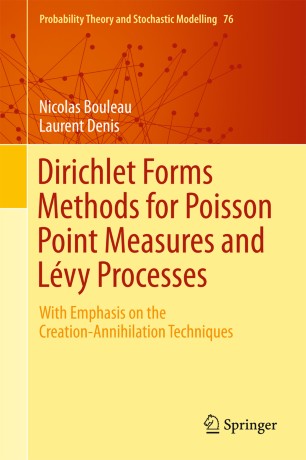 With Emphasis on the Creation-Annihilation Techniques

A simplified approach to Malliavin calculus adapted to Poisson random measures is developed and applied in this book. Called the “lent particle method” it is based on perturbation of the position of particles. Poisson random measures describe phenomena involving random jumps (for instance in mathematical finance) or the random distribution of particles (as in statistical physics). Thanks to the theory of Dirichlet forms, the authors develop a mathematical tool for a quite general class of random Poisson measures and significantly simplify computations of Malliavin matrices of Poisson functionals. The method gives rise to a new explicit calculus that they illustrate on various examples: it consists in adding a particle and then removing it after computing the gradient. Using this method, one can establish absolute continuity of Poisson functionals such as Lévy areas, solutions of SDEs driven by Poisson measure and, by iteration, obtain regularity of laws. The authors also give applications to error calculus theory. This book will be of interest to researchers and graduate students in the fields of stochastic analysis and finance, and in the domain of statistical physics. Professors preparing courses on these topics will also find it useful. The prerequisite is a knowledge of probability theory.