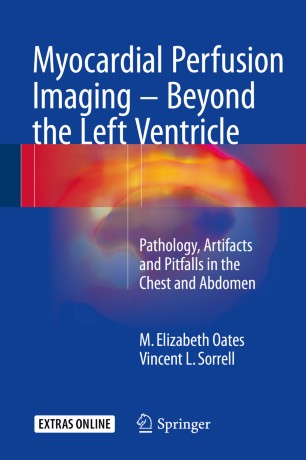 Pathology, Artifacts and Pitfalls in the Chest and Abdomen

This book will serve as a comprehensive reference source and self-assessment guide for physicians and technologists who practice myocardial perfusion SPECT imaging. Readers will learn to identify a wide variety of findings apart from the left ventricle, including those in the chest, the abdomen, and the right heart. It is explained which findings are clinically relevant and related to the reason for the myocardial perfusion imaging examination and which are incidental, with or without important clinical ramifications. The coverage includes a wide variety of common and uncommon focal lesions (e.g., benign or malignant neoplasms) and organ/systemic diseases (e.g., emphysema, cirrhosis and its sequelae, cholecystitis, duodenogastric reflux/gastroparesis, end-stage renal disease) that may be detected with myocardial perfusion SPECT imaging. In addition, guidance is provided in the recognition of typical artifacts, which may appear either “hot” or “cold” on the raw (unprocessed) and processed SPECT images, and, thereby, in the avoidance of potential interpretative pitfalls.

M. Elizabeth Oates, MD, graduated from Boston University School of Medicine, Massachusetts in 1981 and returned to Boston in 1985 to complete a Nuclear Radiology fellowship at Tufts University School of Medicine/New England Medical Center (now Tufts Medical Center). During 15 years at Tufts, she rose to the rank of Professor and served as Division Chief of Nuclear Medicine. In 2001, Dr. Oates became Section Head of Nuclear Radiology at Boston Medical Center and in 2006 she accepted a position as Medical Director of Radiology at the University of Massachusetts Medical School/UMass Memorial Medical Center. In 2007, she was recruited to the University of Kentucky as Chair of the Department of Radiology where she is a tenured Professor of Radiology and Medicine (Cardiovascular Medicine) and holds the Rosenbaum Endowed Chair of Radiology. Dr. Oates is a Past President of the American Association for Women Radiologists. Honored with its Distinguished Service Award, Lifetime Service Award, and Volunteer Service Award, she currently serves on the Board of Trustees of The American Board of Radiology. She has chaired the American College of Radiology’s Commission on Nuclear Medicine and Molecular Imaging since 2011 and is in her second term on the Board of Chancellors. Dr. Oates has served on both the Education Exhibits and Scientific Program Committees for the Radiological Society of North America. She is a member of the editorial board of the Journal of the American College of Radiology and recently completed service as an Associate Editor for Radiology. Dr. Oates has published 140 scholarly articles and book chapters. She has been named by Best Doctors in America annually since 2007. Dr. Oates is respected as a thought leader in her field and her opinion is regularly sought by practitioners, educators, researchers, and leaders.

Vincent L. Sorrell, MD, FACC, FACP-ASIM, FASE, graduated from St. George’s University School of Medicine in 1989. After Cardiovascular Fellowship training at University of Texas Medical Branch, Galveston, and a Cardiovascular Imaging Fellowship at Temple University Hospital, Philadelphia, he started his academic career as Assistant Professor in Cardiology and Radiology and Medical Director of Echocardiography and Exercise Physiology Laboratories at East Carolina University Brody School of Medicine. Prior to being appointed as the first Allan C. Hudson and Helen Lovaas Endowed Chair for Cardiac Imaging at the University of Arizona, he was Chief of the Division of Cardiovascular Medicine at E.C.U. and founder of the William C. Reeve’s Advanced Cardiac Imaging Center. At Arizona, he established one of the first multidisciplinary advanced cardiovascular imaging centers that seamlessly integrated imaging experts from Radiology, Vascular Medicine, Nuclear Medicine, and Cardiology. In 2011, Dr. Sorrell moved to the University of Kentucky to continue his efforts at improving regional and national healthcare through structured development, application, and investigation of advanced cardiac imaging techniques. He is the author of more than 100 publications, 25 book chapters, numerous editorials and abstracts, and three textbooks. He has received many awards for research, education, and mentoring, including the prestigious Richard Popp Excellence in Teaching Award from the American Society of Echocardiography in 2010 and the University of Kentucky’s Borys Surawicz Distinguished Teacher Award in 2014. He has been listed in Who’s Who in Science and Engineering since 2003 and in Best Doctors in America every year since 2007. He is considered a national key opinion leader.

“This book provides a review of incidental pathology, artifacts, and noncardiac findings in the chest and abdomen by myocardial perfusion imaging. … It is a unique and important contribution to the field of myocardial perfusion imaging, and it is well done with nearly 30 well-illustrated chapters. … Overall, this is a useful book for noninvasive cardiologists and an important contribution to the field of nuclear cardiology.” (Ryan Houk, Doody's Book Reviews, February, 2017)
Buy options