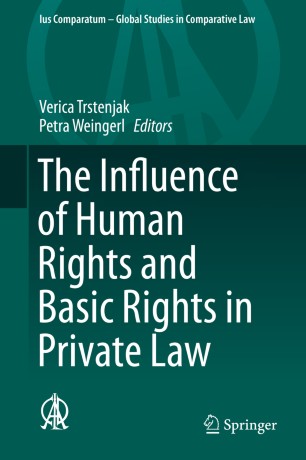 The Influence of Human Rights and Basic Rights in Private Law

This book provides a comparative perspective on one of the most intriguing developments in law: the influence of basic rights and human rights in private law. It analyzes the application of basic rights and human rights, which are traditionally understood as public law rights, in private law, and discusses the related spillover effects and changing perspectives in legal doctrine and practice. It provides examples where basic rights and human rights influence judicial reasoning and lead to changes of legislation in contract law, tort law, property law, family law, and copyright law. Providing both context and background analysis for any critical examination of the horizontal effect of fundamental rights in private law, the book contributes to the current debate on an important issue that deserves the attention of legal practitioners, scholars, judges and others involved in the developments in a variety of the world’s jurisdictions.

“This book presents a comparative perspective on the influence of basic rights and human rights (fundamental rights) in private law across 18 national jurisdictions worldwide and within the legal order of the European Union. … The book offers a valuable contribution to this debate. Within the selected fields of private law, it provides broad and rich insight into various approaches in 18 jurisdictions from all over the world.” (Mirjam De Mol, Rabels Zeitschrift für ausländisches und internationales Privatrecht RabelsZ, Vol. 82 (02), 2018)
Buy options