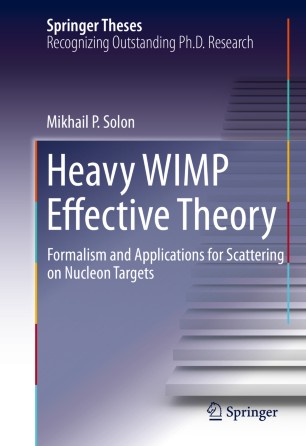 Formalism and Applications for Scattering on Nucleon Targets

This book is about dark matter’s particle nature and the implications of a new symmetry that appears when a hypothetical dark matter particle is heavy compared to known elementary particles. Dark matter exists and composes about 85% of the matter in the universe, but it cannot be explained in terms of the known elementary particles. Discovering dark matter's particle nature is one of the most pressing open problems in particle physics. This thesis derives the implications of a new symmetry that appears when the hypothetical dark matter particle is heavy compared to the known elementary particles, a situation which is well motivated by the null results of searches at the LHC and elsewhere. The new symmetry predicts a universal interaction between dark matter and ordinary matter, which in turn may be used to determine the event rate and detectable energy in dark matter direct detection experiments. The computation of heavy wino and higgsino dark matter presented in this work has become a benchmark for the field of direct detection. This thesis has also spawned a new field of investigation in dark matter indirect detection, determining heavy WIMP annihilation rates using effective field theory methods. It describes a new formalism for implementing Lorentz invariance constraints in nonrelativistic theories, with a surprising result at 1/M^4 order that contradicts the prevailing ansatz in the past 20 years of heavy quark literature. The author has also derived new perturbative QCD results to provide the definitive analysis of key Standard Model observables such as heavy quark scalar matrix elements of the nucleon.  This is an influential thesis, with impacts in dark matter phenomenology, field theory formalism and precision hadronic physics.